Treatment for varicose veins has advanced since the days of surgical stripping. One of the more recent options is an innovative, minimally-invasive closure system that treats varicose veins by gluing them shut. At The Vein Institute, our doctors use different medical adhesives such as VenaSeal™, VeinOff and VenaBlock.

These medical superglues have been traditionally used to close off the main saphenous vein in the thigh; however, it has proven to be successful in treating faulty veins in the pelvic/vulvar region. Most patients find the VenaSeal™ (or other superglues) outpatient procedure to be extremely comfortable, with only a mild ‘pulling’ sensation experienced during treatment.

Medical super glue like VenaSeal represents the next generation in varicose vein treatment and permanently seals varicose veins. But is Super Glue effective for varicose veins and how does it compare to surgery?

VenaSeal and other adhesives is an advanced new treatment for venous insufficiency. It works by delivering a precise amount of medical adhesive to the diseased vein, sealing it off and rerouting the blood to other healthy nearby veins.

The VenaSeal system predominantly targets the great saphenous vein and its branches. This large vein extends all the way from the foot to the groin, and its main function is to propel blood back up to the heart from veins in the lower extremities. As VenaSeal is a relatively new procedure, and short-term results look very effective, long-term data has yet to be validated. In some cases, patients will require additional treatment with sclerotherapy.

Like most modern vein procedures such as sclerotherapy and endovenous laser ablation, the goal of VenaSeal, VeinOff or VenaBlock is to seal the varicose vein shut. The body then naturally reroutes the blood through healthy veins in the area, while reabsorbing the shut vein. The reabsorption causes the vein to disappear from sight.

Like the other procedures, VenaSeal and other medical adhesives are minimally invasive, meaning it involves only a tiny incision or a needle stick. The procedure is performed right at our clinic, with no need to go to a hospital or have an anaesthetic. 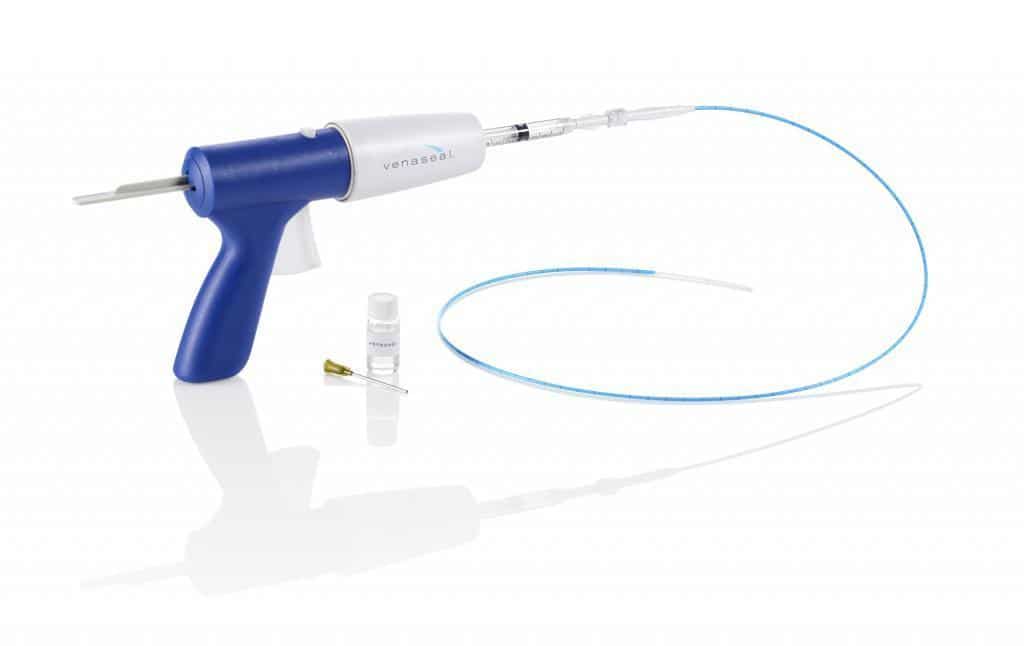 VenaSeal, VenaBlock and VeinOff are different brands of “Medical Super Glue” (cyanoacrylate). They all work on the same principle: sealing the diseased vein. To do so, they involve injecting the medical grade super glue into the vein thanks to a small catheter and under ultrasound guidance, to harden it (sclerosis) and have the body absorbing it. Blood flow is then rerouted through healthy veins.

What is VenaSeal Made of?

VenaSeal is a type of glue known as a “cyanoacrylate”. Cyanoacrylates are not new; this type of glue has been safely used to repair wounds and skin incisions for over 50 years. It has also been used to seal diseased arteries shut. VenaSeal is simply a new application for a well-known adhesive substance currently used by physicians and surgeons worldwide.

How do VenaSeal™ and other medical super glue work?

A small amount of VenaSeal™ adhesive is injected into the diseased vein through a gun feeding into a small catheter. The catheter is strategically inserted into the vein with the assistance of ultrasound-guided imagery. Generally, the procedure will go as follows:

After the procedure, a small bandage is placed over the incision site and patients can immediately return to their normal activities.

A fortnight after your initial varicose vein treatment a follow-up appointment is required to ensure the success of the procedure. Should there be smaller branch veins in need of treatment, this will be carried out using sclerotherapy.

Another 3 weeks later, you can expect another follow-up appointment for a scan of your leg to verify that all the affected veins have remained shut. At this stage, the treatment can be declared completely effective if the results are as per expected.

How Effective is Medical Super Glue?

Many ask us “Is Superglue effective for varicose veins?” Well, numerous studies have shown VenaSealTM to have at least a 92% success rate over 5 years, which is equivalent to the current standard endovenous laser or radiofrequency ablation procedures. However, VenaSealTM has the advantages of not requiring laser or radiofrequency energy, which carry some risks of skin burns or nerve damage, and no need to wear compression stockings after the procedure. Benefits at a glance

What to expect during the procedure 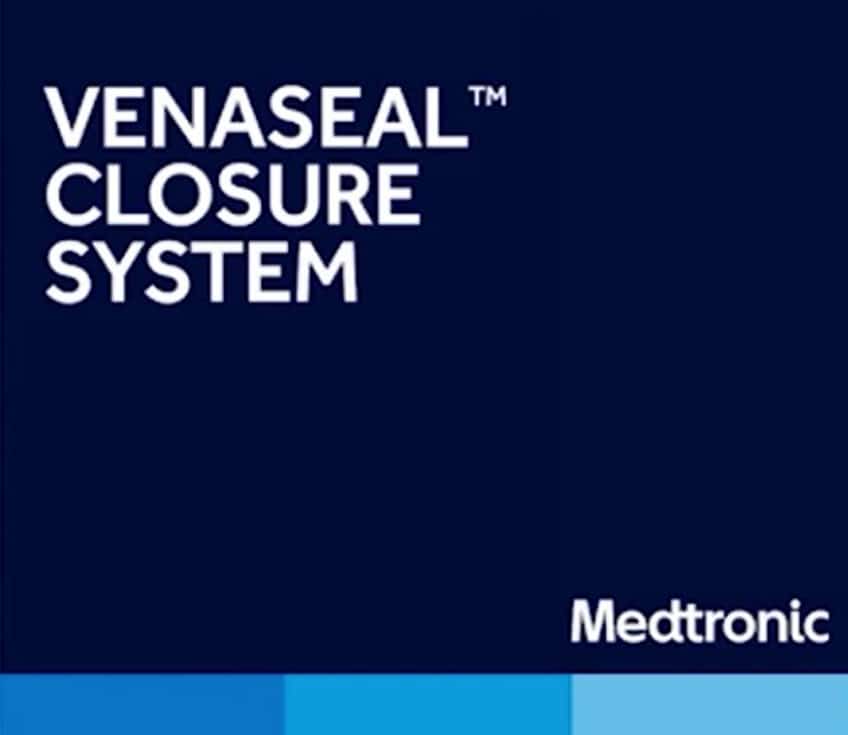 The whole process takes approximately 45 minutes, depending on how many veins are being treated in one session.

Most people are able to make a quick recovery after VenaSeal™. Since there’s no need for anaesthesia, multiple injections or pain medication, patients are able to resume their life right away with only a tiny incision and bandage over the treatment site. However, avoid strenuous exercise such as weight lifting, running or jumping for one week. The next day you’ll be able to remove the bandage and shower.

Within a few months, the body will reabsorb the treated vein, causing it to disappear altogether. Most patients see considerable reduction in the appearance of their varicose veins within four-six weeks, with only one session.

While VenaSeal™ is 98.9% effective at alleviating varicose veins and associated symptoms, there’s a small chance the condition may return after the procedure. Patients are advised to stay active and exercise regularly, to maintain a healthy weight and avoid standing or sitting for extended periods of time to prevent recurrence of the disease.

What Does Medical Super Glue Treat?

VenaSeal, VenaBlock and VeinOff are used to treat Varicose Veins in the lower legs, pelvic, vaginal, and vulvar area. They can also be used for Lipoedema, a chronic and progressive condition where abnormal and excessive amount of fatty tissue is deposited in the body, typically on the upper and lower legs.

Is VenaSeal™ better than laser?

What are the risks of using Medical Super Glue?

Rare risks do exist with VenaSeal™ treatment. These include an allergic reaction, deep vein thrombosis, soreness, and pigmentation. Fortunately, these risks are no more than other treatments for your varicose veins.

Are you a candidate for VenaSeal™?

If you suffer from varicose veins in your legs or pelvic area, you may be a suitable candidate for the VenaSeal™ closure system. The procedure is particularly effective for varicose veins two centimetres or larger in diameter, or for hidden varicose veins buried deep within the leg.

Not everyone is a suitable candidate for the procedure, however. Certain health conditions or severe venous disorders may require other treatment or surgery. It’s best to consult with a vein specialist (phlebologist) to learn if this treatment is right for you.

Have questions about Medical Superglue treatment?

We have listed some of our most asked questions to the right. If you would like to speak to someone please contact us on 1800 455 812 or make an appointment.

What can be treated?

How effective is the procedure?

A number of studies have suggested that Venaseal has a greater than 92% success rate over 5 years which is equivalent to gold standard treatment with endovenous laser ablation or radiofrequency ablation. Recent short term studies have suggested that the closure rate at 3 months is greater than 96%. All patients at The Vein Institute have follow up scans at six weeks to ensure that your procedure has been effective.

What is the process?

Patients usually feel very little to no pain. It’s extremely uncommon for patients to experience significant pain during the procedure or after.

What do I do if I'm very nervous?

Try not to worry, but if you are particularly anxious, please let us know in advance. Alternatively you may listen to music on your phone or read a book. Your favourite music can also be requested on our stereo system (please let our reception staff know in advance).

Yes all patients will require a follow up visit within 3 weeks after Venaseal treatment during which another scan is performed to make sure the treatment has worked. Sides branch veins may be treated with ultrasound guided sclerotherapy at this time if necessary.

What happens to the treated vein?

The vein that has been treated will be sealed during the treatment. This vein will be reabsorbed by the body over time. As everyone has billions of veins, the blood will naturally be rerouted to a different vein.

What side effects or complications can occur with the Venaseal treatment?

Rare: In 10% of cases some soreness after the procedure can be experienced which usually settles with Nurofen in one week.

Extremely rare: skin sensation can be affected by a period of time. There is also a small risk of deep vein thrombosis or pulmonary embolus.

If there are any concerns after the procedure one of our doctors must be contacted.

I want to have the Venaseal procedire. What do I do?

To learn more about pricing for our treatments, please view our:
Pricing

Interested in learning more about our process?
What to expect